We Buy Pairpoint Lamps From Sellers Across The Country

Value of a Pairpoint Lamp

The value of a Pairpoint lamp is closely tied to its shade.  There were just over one hundred different shade types used by Pairpoint.  Fortunately, those styles can be broken down into three different styles which have similar values within each category.  The shade types are puffy, semi-puffy, and painted.  When trying to determine the value of any Pairpoint lamp you still need to look at the characteristics of each individual lamp.  There are qualities in any lamp that can hurt or help the value.  So don’t use this guideline as an exact rule.  We would still encourage you to send us photos of your lamp so we can accurately assess its true value.  Info@PairpointLamp.com

Puffy – Worth the Most Money 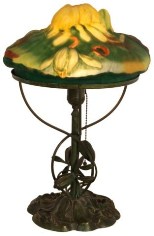 As you might expect, Pairpoint puffy shades are worth the most money out of the three different styles the company made.  Puffy shades are valuable for two reasons.  The simplest reason is that they are popular and in demand.  Collectors are willing to spend more money for them because they have a track record of being worth more money.  The second reason is related to the original production of puffy shades.  It was difficult to form and decorate Pairpoint puffy shades.  They were expensive when they were originally sold and they are still expensive today.  There are different value levels within the Pairpoint puffy category.  Generally speaking, prices range from a few thousand to tens of thousands of dollars.  However, exact values should be addressed on a lamp by lamp basis. 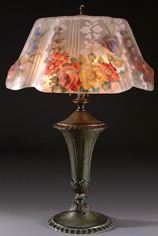 Several Pairpoint shade types fall into a gray area between puffy and painted shades.  Stratford, Ravenna, Papillon, Marlborough, and Devonshire are the first types that come to mind.  These shades will have a border that is puffy, but most of the lamp will be a flat or rounded shape.  Pairpoint lamps like these usually sell for $2,500 to as much as $10,000.  The difference between the two values usually comes down to the eye appeal.  Keep in mind that most lamps with semi-puffy shades will be in the lower price of that range.  Only the really special Pairpoints will get up close to five figures.  As always though, each lamp should be valued individually, not based on broad characteristics.

Let’s say from the start that painted shade Pairpoint lamps can absolutely still be valuable.  There are other styles of Pairpoint lamps that are worth less money than flat painted shade lamps.  However, they really aren’t valuable enough to discuss here.  Painted shade lamps that aren’t puffy can sell for up to $5,000 if they are especially nice.  Most examples will fall into the $1,000 to $2,500 range.  The shades don’t have to look exactly like the one we have pictured.  Many have scalloped or flared bottoms.  All of these lamps were hand painted by the artists at The Pairpoint Company.  The reason these aren’t quite as valuable is because they are readily available.  Puffy lamps are tough to locate and really only made by Pairpoint.  Painted shade lamps were made by many other lamp companies during the early part of the 20th century.

If you need help with the value of your Pairpoint lamp then send us an email with pictures and we would be happy to share our opinion.